Photographs of the Dalwood Vineyards

In 1886 John Wyndham commissioned Harrie Ballard to take a series of photographs of his Dalwood Vineyards, which were then hand-mounted in 18 presentation albums, to record his achievement, before he died. 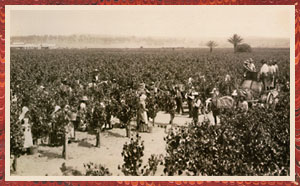 The photographs are historically significant as they are among the oldest known to record the operations of a single vineyard, winery, cooperage and distillery, as well as the local and international awards achieved.

An illuminating Foreword has been written by Alan Davies, Curator of Photographs, State Library of New South Wales. Introductory notes explain the beginnings of the wine industry in New South Wales; the systematic experimental trialling of over 70 varieties by George Wyndham; and, the international wine show successes of John Wyndham, more than a century before the current industry successes.

Proceeds from the sale of this book go towards the restoration of Dalwood House. Price: only A$20 + postage.

Descendants' Day at Dalwood held in 2019

The Dalwood Restoration Association, whose members include both Wyndham and convict descendants, cordially invites the descendants of the convicts, Indigenous people, German vine-dressers, free immigrants, and colonial born employees who worked at any of the Wyndham properties (Dalwood, Mahngarinda, Colly Blu, Bukkulla, Nullamanna or Keelgyrah) between 1828 and 1900, to join with Wyndham descendants for